If you want to find out about the history of swimming in Southern California and how we became a powerhouse, go no further than Jim Montrella. A swim coach from the age of 17 at Lakewood Aquatics, to NCAA winning Ohio State Women’s Swimming and US Olympic coach, Montrella has a wealth of knowledge and love of the sport to share. Read more about his swimming accomplishment on his ASCA bio here.

I spoke with Jim for several hours, covering many topics from his early days as a coach, how USA Swimming began, his introduction and production of swim paddles, to the history behind several teams and the SCS Travel Fund.

“Prior to 1980, a significant number of coaches in a number of sport disciplines were becoming disenchanted with the Amateur Athletic Union because a lot of money was going to track and field and not to the other sports. There were a lot of us that were interviewed in Washington DC by a couple of senators and their staffs. They asked what can we do to help you with your sport? That was early 1970s.

“An outgrowth of that became actually a breakup of the union into separate sports federations such as United States Volleyball Association, United States SwimmingUnited States Soccer, USA Soccer and USA Swimming.

“By the time we got to 1980, we never went to another AAU convention. Our sport became it’s own federation. Ray Essex became our first chief executive director.”

According to Wikipedia: “The Amateur Sports Act of 1978 was signed by President Jimmy Carter, established the United States Olympic Committee and provides for national governing bodies for each Olympic sport. The Act provides important legal protection for individual athletes.”

“From 1978 to 1980, the official responsibilities of governing the sport were transferred from the AAU Swimming Committee to the new United States Swimming. Bill Lippman, the last head of the Swimming Committee, and Ross Wales, the first president of United States Swimming, worked together to ease the transition. This process was made more interesting because the United States boycotted the 1980 Summer Olympics and, during this time, the leadership of the sport was in flux.”

Early on, in the days of the AAU, the YMCAs were very powerful, Montrella said. He mentioned the YMCAs in the southern part of Los Angeles County, such as San Pedro and Long Beach.

“I really never got any experience until high school and started on a swim team in my junior year in high school. I was very late to the sport in today’s standards,” Montrella said. “About two years later, Lakewood YMCA, who I was associated with, built a pool and asked me to be the aquatics director. We started lessons and started up a swim team.

“There were some private swim schools back then and the Los Angeles Athletic Club and the Pacific Coast Club were very significant. From the swim schools that started teams, and the YMCA league in Southern California, which was very active, many more clubs started. The most significant club team and coach had to be Peter Daland at the LA Athletic Club. Peter came from Yale and was assistant coach back under Bob Kippeth. He came out from there to be coach at the LA Athletic Club. He was approached by USC to be the head men’s coach of the program. He coached there until the early 90s. He did a spectacular job.

“We got pretty strong at the Lakewood aquatics club. We actually won the Junior Olympics for 18 years—the local one. Through the efforts of Jerry LaBonte and myself and all our staff members, we were very involved we held the local long course JOs for the local swim committee. Back then it was called Southern Pacific Association Amateur Athletic Union and it was part of AAU. We held those at Lakewood Mayfair Park swimming pool for a couple years. Then Lakewood Aquatic Club ran the Southern Cal Junior Olympics at the Belmont Pool.

“One thing that they should have never done is they put in that diving well, and the water pressure because of the ocean was always playing havoc with the bottom of the Belmont pool. Putting an engineer against mother nature’s shallow table that close to the ocean was insanity. Even though you won’t read that, we all know it’s true.”

“The LSC goes as far north as San Luis Obispo and as far south as Camp Pendleton. And as far east as Las Vegas,” Montrella said.

He explained that San Diego always wanted to remain separate. “The Cleveland National Forest and Camp Pendleton separated it with geography. The San Diego people didn’t want to have to continue to drive 60 miles north all the time and that is just to get to Orange County. There were no programs those days in Carlsbad or Oceanside. It was literally the Coronado Navy Association with Mike Troy.”

“Fifty percent of the interest went into the current fund, the other 50% plus the five cents went into the permanent fund. The current travel fund went to defray expenses to those kids who qualified to go to the national senior meets. Let’s say your daughter qualified for the senior national meet. As you know it costs a fortune for transportation, food, housing, and a lot of people couldn’t afford it. Some of the best swimmers from Southern California couldn’t go and couldn’t represent us at Nationals, which was a shame.

“It was kind of like the Olympics right now. We only can take two people in each event to represent us. But we have eight others that would have been in the consolation finals at least.

“As the current travel fund grew, we decided that we would split that fund between short course nationals and long course nationals. Then the kids got their share of the money divided by the number of kids of whatever money was available. As you might guess, the permanent fund grew, as did the current travel fund and over a period of years got more and more money to defray expenses. That helped a lot of clubs that didn’t have the money to help defray the expenses.

“What started out a $200 donation from Lakewood Aquatic Club, primarily under Jim Sterkel—I don’t think his daughter Jill even knows this—grew to well over $2 million. There shouldn’t be a child in Southern California that should be in need of defraying costs to go to the national senior championship.” 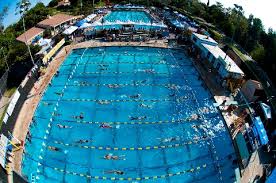 “Mission Viejo Company developed 32 square miles. Mission Viejo decided they had to relate to families so they set aside land for fields, tennis courts and swimming pools.  They developed the pool and in its day it was second to none. It’s still a beautiful facility. But, unfortunately we will never host another national championship there unless we get two 50 meter pools. The Mission Viejo Co. realized that in order to sell homes, they made it very family oriented. They also developed the mall. It’s now the Shops at Mission Viejo. With the mall and auto row, hospital, etc. we have huge tax dollars which help. This allows a lot youth and senior programs. The city council was great at following the company’s mission. And it’s great for small business. There are a lot of small businesses in Mission.

“A lot of us left club coaching. We had brought it from a volunteer type of status, and we evolved it to more of a professional coaching status. Now there are a lot of professional club coaches.

“A lot of us went on to become college coaches. I went to Indian River and became athletic director of ten sports as well as coaching swimming. Then after two years, we went back to school I got my masters and my wife got her bachelors. We went to Ohio State and I became the head woman’s coach.

“There aren’t as many club programs owned by the coach, but there should be. There’s only been less than six parent run clubs ever win a national championship. I can only remember the Cincinnati Pepsi Marlins and it was only one time when there was a merger of three different teams in 1980. I don’t think there’s ever been another one.

“Coach owned teams are successful because there is a vested interest and because a professional is running the team.

“Parent run organizations can be very effective and they are very helpful, but to win a national title it’s near impossible because it takes too long to get things done. 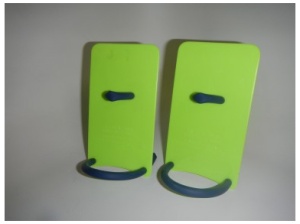 “Flip Darr was the first coach I saw use hand paddles including with Gary Hall. I liked the concept and I had some ideas. I asked Flip if he wanted to see them or go into a partnership. He said, ‘No, you go with it.’

“I developed some prototypes and I got some help with a gentleman name Ray Judkins, who is now deceased. He was in direct marketing sales. Ray Soft was a swim parent with two daughters who swam for me, and he had an injection molding business. I went to him and showed him the designs and prototypes. I came out with three sizes. This took about three years, from prototypes to production and I controlled everything. I bought the resins and the dyes, I contracted out to the molders, stamping, routing cuttings, packaging. There were about six guys I trusted in the country and they helped with distribution including John Gambrel and Mike Troy.

“I had originally asked Speedo a few years earlier and they said no. I got the product up and running and had international distribution.

“The size of the paddle has nothing to do with the size of the child. A paddle should always be flat. It should always have a single attachment at the finger to the knuckle. The wrist band is only for a beginner, concave or convex are not teaching all that they can teach. You can use different paddles for different things.”